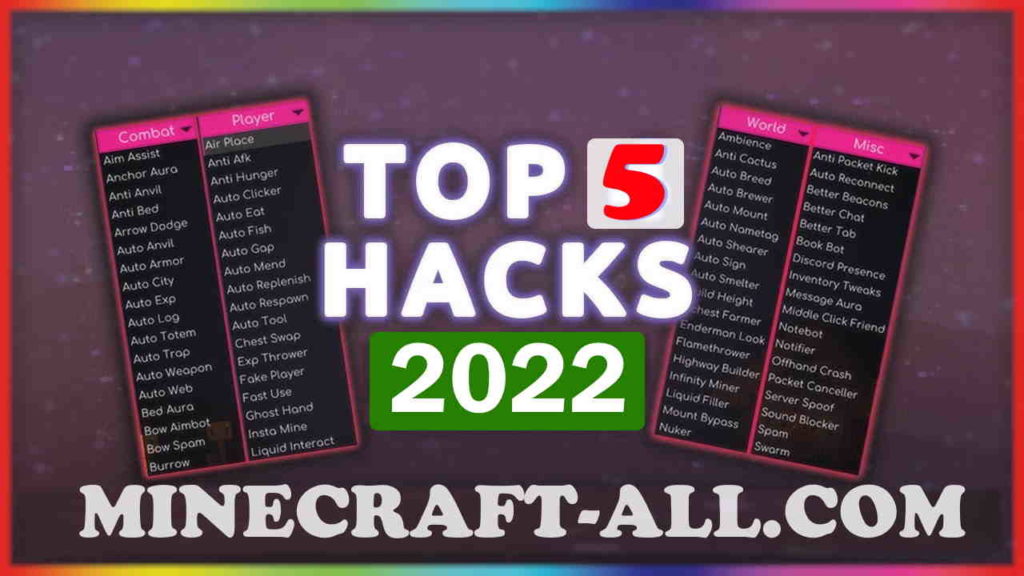 At the moment, there are a large number of cheats for Minecraft, each of them has its own advantages and disadvantages. In this article, we will talk about the TOP 5 Minecraft cheats of 2022. Some of them have been tested by time and are still used by a huge number of players. Using these cheats, you can get a lot of positive emotions while playing on the server.

The Huzuni cheat is quite popular in the world of Minecraft. Players have been using it for many years now. Despite his age, he is showing himself well in 2022. With this cheat, you can significantly increase your level of play.

The cheat has a wide variety of functions, including:

Criticals – Use it to deal critical damage to your opponent.
KIllaura – with this function, no one will be able to approach you, because everyone who tries to get close to you will receive damage.
ESP – this feature allows you to see other players through the blocks.
FLY – as the name implies, it becomes possible to fly as in Creative.
Jesus – it becomes possible to move on water and lava.
Speedmine – digging speed is increased several times.
Bow Aimbot – By activating this function, you can get AIM when shooting from a bow.
Sprint – increases running speed.

And this is not the full functionality of this mod. Of the shortcomings, it is worth highlighting the likelihood of a ban when used, but this disadvantage can be easily solved with proper use. This mod has plenty of functions, the main thing is to use it carefully so that other players do not suspect you of cheating. 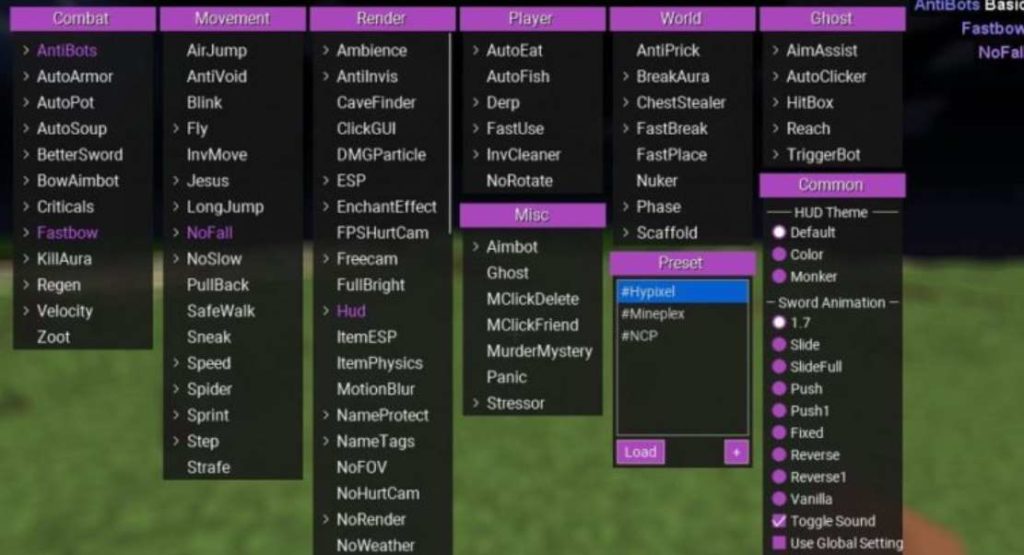 Sigma Client, unlike the previous one, is a new cheat for game version 1.16.5 – 1.12.2. Of the features, you can immediately highlight the fact that it contains more than a hundred free cheats for the game. After numerous tests, the players confirmed that this is a quality mod, one of the best to be exact. When you open the cheat panel, you will see 6 different categories: Combat, Movement, World, Other, Visuals and Player. Each of the categories has a large number of useful cheats, for example, let’s name a few of the most interesting ones.

Again, it is worth mentioning that this is only a small part of all available cheats. If used correctly and carefully, this cheat can bring you a lot of positive emotions while playing on the server.

Flux is a fairly popular mod in the world of Minecraft, a huge number of players know about it. We can say that it is an unchanging classic among cheats. Flux is constantly updated, one of the latest versions added features: Kill Aura, Anti Bots, Anti Knockback, Anti Fire/Potion, Auto Armor, Auto Clicker, Speed, Inventory Cleaner, No Fall, Break Aura, Fly, Xray and many more . In terms of the number of functions, it is in no way inferior to the previous two. The cheat is best suited for PVP battles. 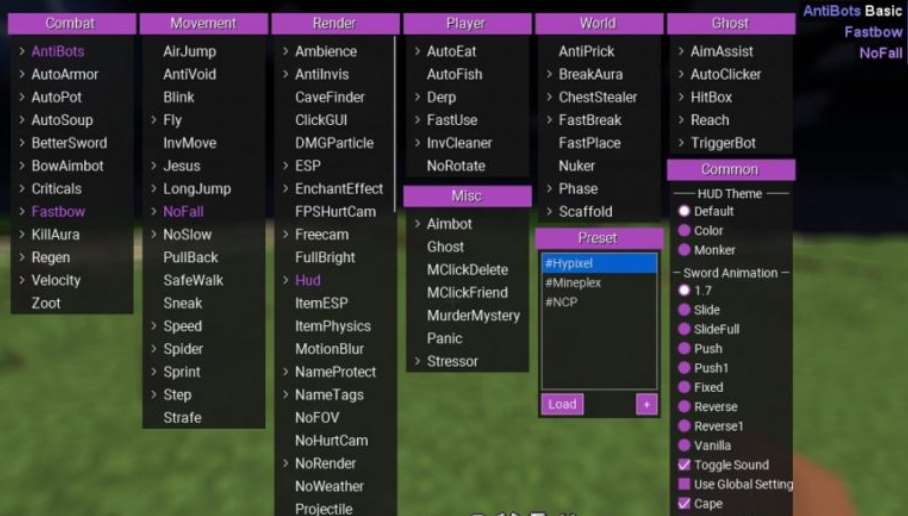 You can see a more detailed list of functions in the picture below:

Flux has no obvious shortcomings, you can only highlight that if used incorrectly, you can catch a ban. Therefore, it is worth using the cheat carefully, it is important not to get too hot in front of other players. In this case, the game using Flux will bring you a lot of fun and diversify the gameplay on the server.

The Wurst cheat is very popular among beginners, and it is intended for them. In its functionality, there are more than 130 different cheats for a variety of games on the server. Here are some of the most popular features in Wurst:

Click Aura – This feature allows you to attack all targets near you.
FastPlace – allows you to build blocks several times faster.
FightBot – automatically fights without the help of the player.
Anti Potion – removes negative effects from potions.
AutoMine – mines all the blocks you look at.
Boat Fly – allows you to fly on a boat.
Invisibility – With this feature, the player can become invisible to other users.
Regen – Restores your health faster. 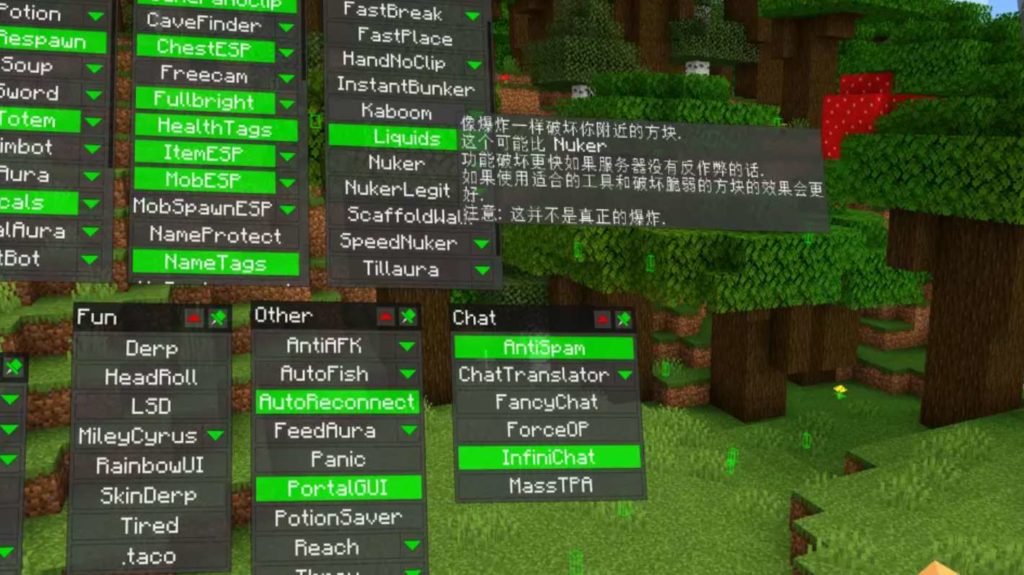 This is just a small part of the cheats, below you

Of the advantages, it is also worth highlighting the fact that the cheat is constantly evolving. Wurst is most often the fastest to adapt to new versions of the game. Among the shortcomings, it is worth highlighting that you can play with this cheat on simpler servers, or on servers where anti-cheat is poorly implemented. On larger servers, cheats will most likely not work.

Aristois is a fairly popular mod among players. It has a lot of cheating features for Minecraft. The mod works great on the latest versions of the game. All functions are also conveniently divided into categories: Auto, Combat, Render, Movement, World, GUI, Other.
Most of the functions that the cheat provides are the same as in the previous versions. Among the interesting ones it is worth highlighting:

Killaura – with this function, you can attack all enemies around.
AutoReconnect – automatic reconnection.
Trajectories – the ability to render trajectories.
NoFall – The player does not take damage when falling.
Hud – the game hood is removed.
Radar – adds a radar.

This is just a fraction of all available cheats, you can check out the full list below:

However, the Aristois cheat also has some disadvantages. Many talk about inconvenient controls, especially when compared with the above cheats. Also, cheats will most likely not work on more advanced servers. And on some servers, some functions will simply not be available, so cheats for each server must be selected individually.